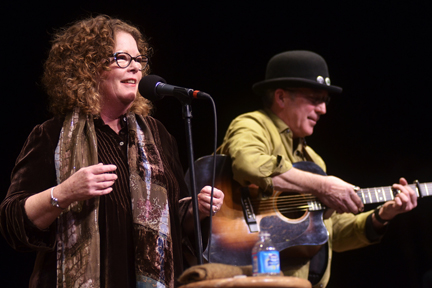 Grammy Award winner Mollie O’Brien became known to the rest of the world as a singer’s singer when, in 1988, she and her brother Tim O’Brien released the first of three critically-acclaimed albums for Sugar Hill Records. Portland FolkMusic Society is excited to open our 2018-2019 Concert Season with folksinging favorites Mollie O’Brien and her husband, guitarist Rich Moore, who have for nearly 30 years quietly made it their mission to find, mine and reinvent other artists’ songs. They are geniuses at the craft of interpretation in the way that great singers, since the beginning of popular American music, have made the songs of their era their own. As songwriters they add their own tunes to the canon of American roots music they inhabit and show us they’re completely at home with their music.