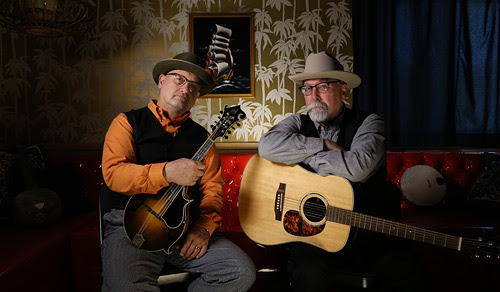 Nationally recognized Bluegrass duo Mike Compton and Joe Newberry have agreed to swing through Scio while on their West Coast tour!  Compton is a Grammy award-winning mandolinist and Newberry is an IBMA award-winning songwriter who have teamed up for the “Roots of Bluegrass” tour. Their combined music industry endeavors have enabled them to entertain millions of people, including the more than 4 million regular listeners of A Prairie Home Companion, and through the Grammy Award-winning soundtracks from the movies, O Brother, Where Art Thou and Cold Mountain.

Mike Compton has entertained from Carnegie Hall to the White House – and lots of good folks’ houses in between. The New York Times calls him “a new bluegrass instrumental hero.” He has performed on 100+ CDs in a variety of genres with some of the most beloved artists of our day. At heart, Mike Compton is a preservationist, continuing the music that Bill Monroe innovated on the mandolin and which set the standard for two generations of bluegrass mandolin players.

Joe Newberry is a prizewinning guitarist, songwriter and vocalist known far and wide for his powerful banjo playing. He won the songwriting prize for “Gospel Recorded Performance” at the 2012 IBMA Awards for his song “Singing As We Rise”, and was co-writer [with Eric Gibson] of the 2013 IBMA “Song of the Year,” “They Called It Music.” A longtime guest on A Prairie Home Companion, he was a featured singer on the Transatlantic Sessions 2016 tour of the U.K., and at the Transatlantic Session’s debut at Merlefest in 2017.