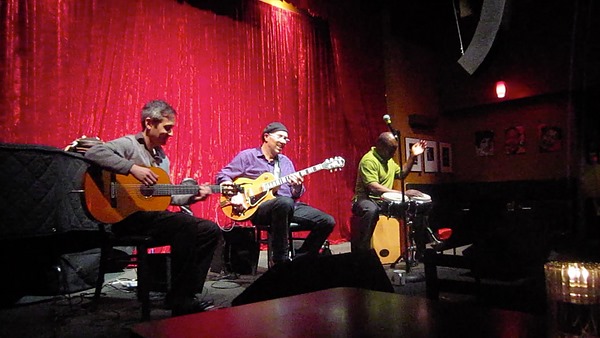 Caminhos Cruzados will perform captivating Brazilian bossa nova on the Experience Music Series on the PCC Rock Creek Campus.  The public is welcome, and there will be a question and answer session with the performers after the concert. The concert will be held in building 3. Parking is $2 (permits available at machines).

Dan Balmer has long been considered one of the finest guitarists, composers, and educators in the Northwest, and has been hailed by the Los Angeles Times as, “the model of what a contemporary guitarist should be.”

Nat Hulskamp studied ethnomusicology at the University of Washington, and in addition to flamenco guitar plays the Arabic oud. He has studied flamenco extensively in Spain and performs with Shabava Persian Ensemble, the Nat Hulskamp Trio and the nationally known world music group Seffarine (with Lamiae Naki).

Israel Annoh is a renowned master percussionist originally from Ghana. His style has its roots in Ghanaian and other West African music as well as jazz greats such as Max Roach. He has played with Highlife pioneer E.T. Mensah and Obo Addy.

Lamiae Naki  was born in the city of Fes and was drawn to music from a young age. She began singing, writing songs, and using every resource to find new music and influences from widely varying cultures. Lamiae has also studied Andalusian music and other forms of classical Arabic music in Fes, and has continued to creatively apply her expertise in Moroccan and Andalusian music to many other traditions.