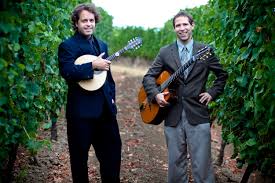 Tim Connell has created a sophisticated and original global mandolin style.  Regarded as one of the top North American interpreters of Brazilian choro, Tim has also developed his own unique voice for the instrument, described in a recent Mandolin Magazine cover story as “fiery and energetic, soulful and evocative.”

Mike Burdette has been performing Brazilian choro and gypsy jazz guitar for the past seven years with many of Portland’s best, including Tim Connell, Jason Okamoto, David Stassens, and Joseph Appel. His pursuit of excellence in these styles has led him to study with many of today’s leading players, including Mike Marshall and Choro Famoso, Dudu Maia, Douglas Lora, and Don Stiernberg.

These two world class musicians play a variety of songs: Brazilian Choro, Swing, and some very cool arrangements of Beatles tunes as can be heard on Tim’s latest CD “MandAlone” and others.

O’Connor’s offers a Happy Hour menu, a full dinner menu and a fully stocked bar. Come to this cosy setting and listen to two superb musicians perform and have some good food!