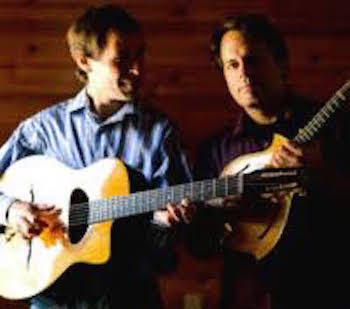 Wednesday Night Bluegrass at O’Connor’s Vault continues Sept 27 @ 7PM with Tim Connell & Mike Burdette. These world class musician don’t play much bluegrass but the play a brand of acoustic music that should NOT be missed! $10 cover and worth every penny.

Tim Connell has created a sophisticated and original global mandolin style.  Regarded as one of the top North American interpreters of Brazilian choro, Tim has also developed his own unique voice for the instrument, described in a recent Mandolin Magazine cover story as “fiery and energetic, soulful and evocative.”

Mike Burdette has been performing Brazilian choro and gypsy jazz guitar for the past seven years with many of Portland’s best, including Tim Connell, Jason Okamoto, David Stassens, and Joseph Appel. His pursuit of excellence in these styles has led him to study with many of today’s leading players, including Mike Marshall and Choro Famoso, Dudu Maia, Douglas Lora, and Don Stiernberg.