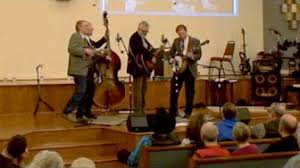 The series of “Bluegrass Wednesdays” continues April 3 with Sunny South at the Gastro Mania Annex in Multnomah village. 7-9PM. $5 cover.

The original Sunny South band was formed in 1980 by four Portland area musicians who loved the original sounds of early bluegrass music as it was played in the 1940’s and 1950’s. The band, consisted of Sonny Hamm0nd (Guitar), Dave Elliot (Mandolin), Mike Stahlman (Banjo) and Tygh Traschel (Bass), became one of the premier northwest bluegrass bands of the 1980’s, playing many
concerts, shows and festivals up and down the west coast and into Canada for 12 years. The band dissolved in 1992 due to Sonny’s declining health and subsequent passing, but it left behind manyfans who remembered the close four part harmonies and sparkling instrumentals that became the band’s trademark.
In 1998, the Oregon Bluegrass Association honored Sonny by naming its annual gospel show the Sonny Hammond Memorial Gospel Show as a tribute to his love of gospel music and the band’s performances of many early gospel tunes. In 2016, the OBA asked the surviving members of Sunny South, who had moved on to other bands, to do a memorial gospel concert and perform some of
the old Sunny South material as a way of honoring the OBA’s roots. Dave, Tygh, and Mike asked an old friend and wonderful singer, Steve Reischman, to take Sonny’s place in the group. In January 2017, the reunited Sunny South performed at the OBA Gospel show to a sellout crowd who loved hearing the old melodies once again. Since then, the band has been asked to perform at numerous concerts and bluegrass festivals and has br ought the old sounds of early bluegrass gospels and secular tunes to many audiences.
The music they play harkens back to Bill Monroe, Lester Flatt and Earl Scruggs, The Country Gentlemen, and other groups from the 1930’s and 1940’s, and showcases four part harmonies with acoustic guitar, mandolin, banjo and bass accompaniment.
The music will make you smile and carry you back to a simpler sound.

Gastro Mania offers a full dinner menu and a fully stocked bar. Come to this great setting and listen to classic  bluegrass & country and have some good food!