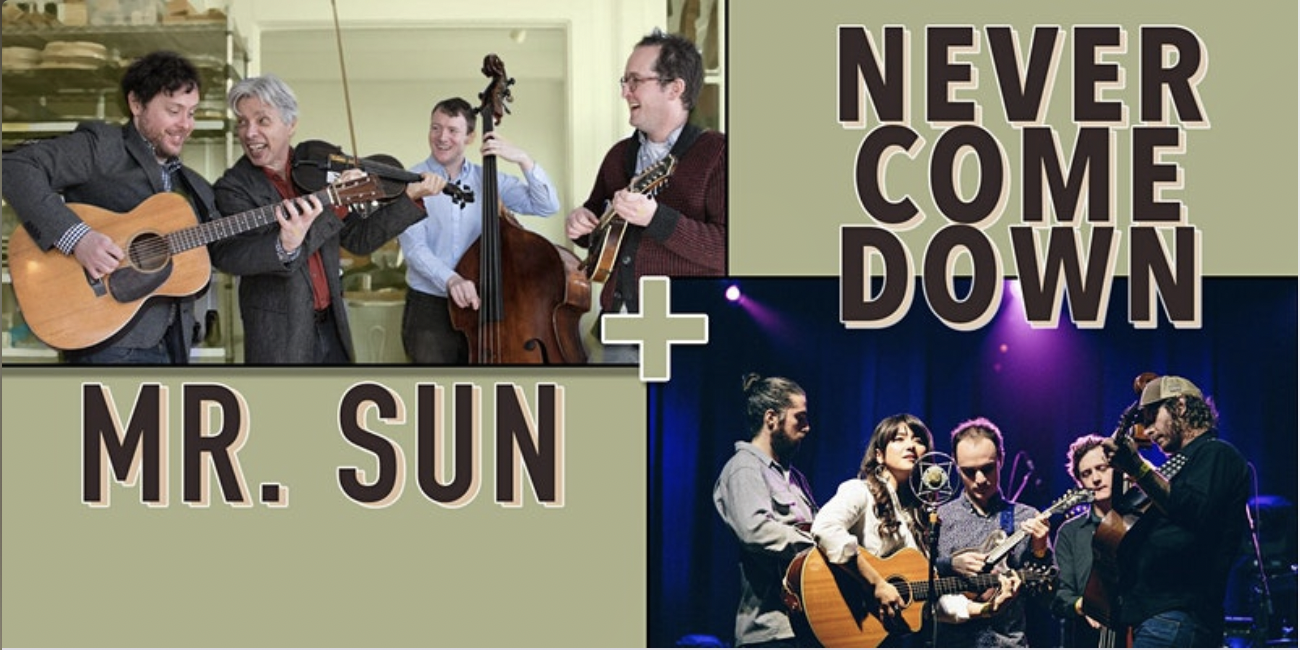 TOC Welcomes Mr Sun and Never Come Down straight off their performances at Wintergrass Festival!

Mr Sun comprises 3 generations of some of the sharpest minds to apply themselves to the American String Band.

Legendary fiddler Darol Anger is at home in a number of musical genres, some of which he helped to invent, and is a member of the original “nuclear” generation of pickers who extended Bluegrass, Jazz, and Classical music to find their common ground; Mr Sun is the latest iteration in that legacy. Joe K. Walsh is one of the foremost contemporary mandolinists, with 4 award-winning years in the Gibson Brothers 2 solo recordings, and a Berklee professorship. Grant Gordy is a standout in the crowded field of Acoustic Guitar Wunderkinds. Grant’s work was quickly recognized for its kaleidoscopic excellence and startling emotion, fusing Jazz and Bluegrass concepts to an unprecedented degree. The group recently added the masterful bassist Aidan O’Donnell, a Brooklyn, New York (by way of Scotland) jazz veteran.

The 4 musical personalities of Mr Sun are so strong and personal that one might imagine the group could explode, but for the palpable love and humor that emanate from every note they play. The group means to take a relaxed approach to writing its own chapter in the American Music Saga with their new CD “The People Need Light”.

Weaving together modern and traditional styles of bluegrass and Americana, Never Come Down is a Portland, Oregon based 5-piece composed of Joe Suskind (guitar), Crystal Lariza (vocals), Brian Alley (banjo), Kaden Hurst (mandolin), and Ben Ticknor (bass). Their dedication to thoughtful songwriting and dynamic arrangements highlight polished technical skills and a commitment to listening to each other. Formed in 2018, the band released their self-titled first album that year and second album Better Late Than Never in 2021. They’ve toured internationally and have found acclaim at festivals and venues such as Iceland Airwaves, John Hartford Memorial Fest, Americanafest, FreshGrass and RockyGrass.