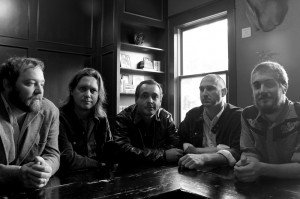 This is one of the best values in Portland bluegrass music. Jackstraw plays every Tuesday at the Laurelthirst from 6-8pm. No charge for the music and the food is pretty good.

A little about the band: Jackstraw formed in 1997 when rhythm guitarist Darrin Craig and lead player Jon Neufeld met mandolin picker David Pugh and bassist Jesse Withers at Artichoke Music, a Portland guitar store. Six records and 14 years later, the band has toured throughout the United States, playing roadhouses, clubs, listening rooms and festivals. Along the way, they’ve shared bills with bluegrass greats such as Del McCoury and Tim O’Brien and welcomed legends like Danny Barnes and Tony Furtado as temporary band mates. The band’s devoted following includes bluegrass purists, altcountry fans, kids looking to dance, and people who know a good tune when they hear one. Jackstraw has developed a reputation over the years for their impeccable musicianship and hard-driving original songs.